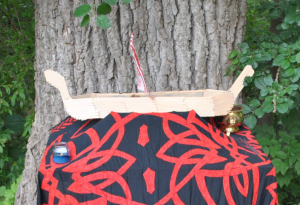 The Summer Solstice is the celebration of Midsummer and the Sun at the height of its power. It is at this time that the solar Deities possess their most strength and greatest importance.  The date of celebration for this High Day varies from the twentieth to the twenty-third of June depending on the Solstice date. There is some evidence that it may have been celebrated as late as the twenty-fourth.

Midsummer appears to be yet another High Day imported to the Celtic lands by the Norse.  Midsummer was also known by our Norse ancestors as the Feast of Great Blessings, a day that celebrated the shortest night of the year and was a time of great rejoicing. Midsummer is a particularly holy day dedicated to Balder, as well as Thor and Sif.

As in many ancient celebrations, fire played a significant role.  Midsummer was the day that, according to Celtic legend, serpents would roll themselves into a ball and form the “serpent’s egg” or “Druid’s Egg”. Anyone who had one of these “eggs” was said to possess great magical powers.  Dew collected on Midsummer morning is believed to have great healing powers, especially for the eyes. Water gathered from sacred wells, ponds, and streams was believed to also have greater powers during this season.

It is around the time of the Summer Solstice that the green world has reached its full bloom and it is on Midsummer’s Eve that all herbs are at their greatest potency. Herbs with special magical properties at this time are the rue, roses, St. John’s wort, vervain, and trefoil.  St. John’s wort is used to divine for a future spouse. Birch, fennel, St. John’s wort, orpin, and white lilies were used to decorate the doors and windows.

It has become Whispering Lake Grove’s tradition to re-enact the “Death of Balder” during our seasonal enactments on Midsummer. Members of the Grove make gifts for Balder, a long ship is made, as well as images of Balder and his wife Nanna. A funeral is held in Norse tradition and the ship and its contents are burnt in the Sacred Fire.