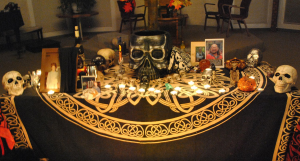 November Cross-quarter, also known as Samhain or the Feast of the Dead, is the first of the four major Celtic fire festivals and is celebrated largely by the Pagan community on the eve of November 1st. Samhain is a day between the old year and the new year, yet part of neither.  It marks the beginning of winter and end of summer, as well as the beginning of the dark half of the year and the end of the light. Due to being a threshold or liminal time (a time between), Samhain is a very magical time, a time when the world of the living and that of the spirit become one.

For the Ancient Celts, Samhain marked the final harvest. Crops that were in the fields on Samhain would remain in the fields because by this time the goodness and vitality of the crops would have been lost. Flocks were brought down from summer pastures to winter quarters and stock animals were culled to lessen herd numbers for the hard villages where they would remain until Beltaine. The Celts welcomed home their ancestors who chose to return from the Otherworld to walk among the living on Samhain.

Today, Samhain rituals continue to celebrate the final harvest, whether as an agricultural harvest or a final reaping of the seeds of creative inspiration, planted and tended to maturity throughout the past year. Samhain remains a potent time for magic, divination, and communing with spirits and fairy folk. A time of remembrance of one’s ancestors of blood, as well as those of spirit. Samhain is a time to reflect upon events occurring within the past year and a time to set goals and make oaths for the year to come.

For Whispering Lake Grove, Samhain is also the time when new Grove officers take their Oath of Office and pledge their service to the Kindred and to the folk.