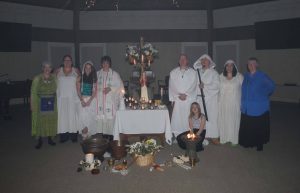 February Cross-Quarter, also known as Imbolc or Candlemas, is another of the ancient Celtic fire festivals, marked by the kindling of the sacred fires to encourage the return of the sun and is often referred to as the Festival of Lights.

When Christianity finally reached Ireland, the Catholic Church had their work cut out for them. It is said that there are more Irish wells dedicated to the Goddess Brighid than to Saint Patrick himself.  Despite attempts by the church to demonize all of the Pagan Gods and Goddesses, they fell short in the case of Brighid and canonized the Goddess instead, as St. Brigit.  The Festival of Imbolc is also the origin of the Christian festival of Candlemas.

For our Celtic Ancestors this celebration marked the return of Spring, the stirring of the first seeds and the lengthening of the day.  Warmth from the sun instilled new hope that Spring would soon be upon them.  A more personal and localized festival than Samhain or Beltaine, Imbolc was often observed by individual families, instead of entire communities. The celebration of Imbolc is said to have commenced when the local sheep began to lactate. At this time of the year Celtic farmers prepared for ploughing and warriors made ready their weapons for the season to come.

Today, Imbolc is usually celebrated on the eve before February 2nd.  It is an important time for divination for the upcoming season, including weather divination.  Other customs include the women of the house “smooring” the hearth before retiring on the eve of Imbolc. In the morning they would look for signs of a visit from Brighid.  The weaving of the “Brighid’s Cross” from straw or rushes was a traditional activity.  These would be hung in the home for protection, especially from fire.  It was also customary for the men to make the image of Brighid from straw.  The brideog would then be placed in the Brighid’s Bed.