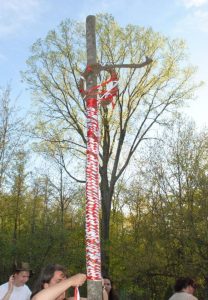 Of the Irish Celtic fire festivals the May Cross-quarter, or Beltaine, is perhaps the most widely celebrated, though often today disguised as May Day. In more recent times, Beltaine has been celebrated beginning on the eve of May 1st, but like many of the other Celtic High Days, was probably originally celebrated as the crops, trees, and plants were coming into full bloom and greenery.

The following comes from Robert Graves, “… drink from a well before sunrise. Wash in the morning dew, adorn yourself with greenery. Watch the sunrise, dance round the Maypole and otherwise abandon yourself to the season. A woodland frolic culminating in indiscretion is the order of the day.”  This time of the year couples find themselves running off into the woods after the lighting of the balefires to answer the call of nature.

Beltaine, though a time of fertility, was also a time of birth. Human babies conceived at Lughnassadh were born at this time, as were the young of livestock and other animals. Unlike the activities of the winter months of game playing and storytelling. Summer was a time of work in preparation for survival of the winter that inevitably lay ahead.  Sacrifices were offered at this time to ensure that crops and livestock would not be destroyed and thus reach maturity.

Beltaine was the season when young men were given weapons.  New weapons were named and dedicated, as well as oaths on weapons sworn.  Hiring fairs were also a regular event. Landlords and farmers would hire hands for the summer months from these fairs.  It was traditional in Ireland during Beltaine that two large bonfires be kindled from nine sacred woods at Tara each year and all other fires to be extinguished. It was said that from the great fire at Tara all others were lit.  It was customary to drive cattle between these two fires as an act of purification and protection before returning the to summer pastures.  Commoners would also leap the fires for self-purification. Beltaine is also referred to as Spring Equinox, Beltane, Rood Day, Rudemas, Walpurgisnacht, and May Day.

In France, girls dance around the Maypole while one boy dressed in greenery (called Father May) dances in the opposite direction. Farmers of the region would herd their cattle through the balefires for protection and assured fertility.  Menfolk would jump the balefires for good luck.  There are many other traditions that are associated with May Day, most of which involve young girls divining the nature of the young gentlemen they will wed.

The veil between this world and the next is just as thin as at Samhain and the activities of the Sidhe are dynamic. For some it is considered unlucky to get married in May because although this is the time of marriage, it is a Divine Marriage.  That and the fact that children conceived at this time of the year were born in the winter and the survival rate at that time was quite low.

Beltaine is an excellent time to give offerings to the Sidhe, such as milk, honey, and nuts.  These offerings are often left at the base of trees of fertility such as Oak, Birch, Elm, or Fir.  It is also a good time to collect together the season’s first flowers to take to graveyards or to deliver to the nursing homes.