The August Cross-quarter also known as 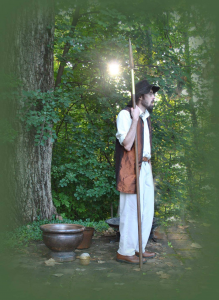 Lughnassadh, or the Feast of Lugh, is the first of the Harvest Festivals: Lughnassadh, Harvest Tide, and Samhain.  The corn and wheat have become ripe and ready to bring in from the fields.  For this reason Lugh is known as the God of the Corn or in more modern times, John Barleycorn.

This holiday is also known as Lammas, which comes from the Old English “Loaf Mass.” This name, though Christian in nature, is favored by many Witches and gives thanksgiving for the wheat which makes the bread and beer for the rest of the season.  This holiday is also known to the Norse as the “Loaf Feast,” a feast of the grain, Thor, and Lady Sif. Late in July, the Greeks celebrate Panathenaia in honor of the Goddess of their city.

Lugh is the heroic solar deity of the Tuatha and was born of the Goddess Ethniu, daughter of Balor and Cian. Lugh was schooled in all of the arts and as such was referred to as “The Many Talented One.” His face was compared to the sun and it was said that he wore red from sunrise to sunset. Lugh fathered Cuchulainn with his wife Dectera.

Lugh’s foster-mother was Tailtiu, who was traditionally honored as the Goddess that cleared the fields of Ireland so that it may be harvested. Her sacrifice is often honored by games of athleticism and festivals celebrating the first of the grain harvests. The folk have been without bread and beer since the previous season and now with the introduction of the harvest, these luxuries can be reintroduced into the daily meals.